Register/ Log In to Earn 2%
Bolt⚡ Coins on this Purchase!

What’s in the Catalog?

Netflix has an extremely broad catalog of video content, but it changes all the time. Shows available one day may be gone the next. It’s difficult to state authoritatively what is in Netflix’s catalog at any given moment, but that’s all part of the fun, right? Innumerable third-party websites, including PCMag, offer articles with titles like Everything Coming to Netflix This Month (as well as Everything Leaving Netflix), so that’s one way to stay in the know. Note that Netflix will lose many of its most-watched shows in the near future, including The Office (to NBC’s Peacock), Friends (to HBO Max), and several Marvel movies (to Disney+). This is potentially precarious new ground for Netflix, since it will need to rely more heavily on its original content in the coming years. In fact, the change is already happening. As it increases original content offerings, the total size of Netflix’s library is decreasing. 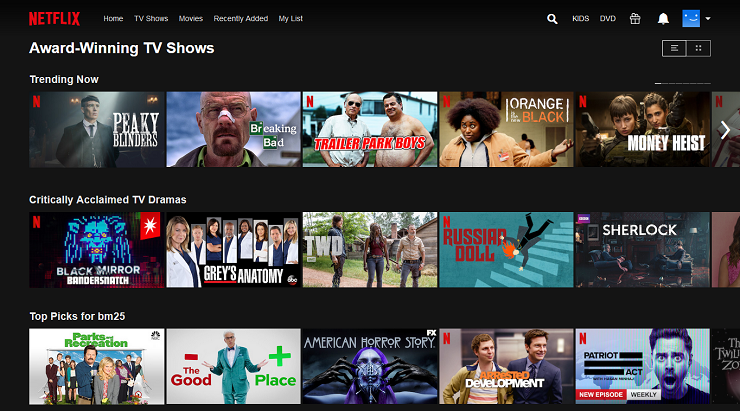 The TV shows available on Netflix are season-complete, which isn’t always the case for competitors. Hulu sometimes only has the most recent handful of episodes of a show, making it impossible to catch up if you fall too far behind. On the other hand, Netflix only adds shows a season at a time. Hulu offers at least some of its shows within a day or two of broadcast, so you can at least be within striking distance of the cultural zeitgeist if you’re a cable-cutter. Want to know what other people are watching on Netflix? The service now maintains lists of the top shows and movies on the platform.

Netflix is in a good position with its original productions though, with many titles becoming pop culture phenomenons. This impressive list includes shows like Black Mirror, Bojack Horseman, Dead to Me, Locke and Key, Never Have I Ever, Orange Is the New Black, Ozark, Russian Doll, Stranger Things, The Crown, The Stranger, The Umbrella Academy, and The Witcher. Many of these productions, including I Care A Lot, Ma Rainey’s Black Bottom, The Crown, The Trial of the Chicago 7, and The Queen’s Gambit, won awards at the 2021 Golden Globes. Netflix also earns a top spot in our roundup of the best video streaming services for celebrating Black art.

Netflix specializes in big-name, blockbuster documentaries on household names that rack up award nominations. From Miss Americana: Taylor Swift to Becoming, a documentary about Michelle Obama, to Beyoncé’s Grammy-winning Homecoming, there are plenty of behind-the-scenes documentaries that delve into the lives of celebrities. Of particular note is Netflix’s Black Lives Matter Collection, which features titles like the Oscar-nominated What Happened Miss Simone?, Grammy-winner Quincy, The Two Killings of Sam Cooke, and 13th. There are also nature documentaries like the controversial Blackfish, and conversation starters such as Being Elmo and FYRE, a documentary about the disastrous Fyre Festival in 2017.

There’s also a wealth of true crime documentaries like Amanda Knox, Long Shot, and American Murder: The Family Next Door. If you’re looking for something a little more uplifting, Netflix offers titles such as My Octopus Teacher and The Speed Cubers, a documentary about Rubik’s Cube competitors. Sports fans should watch the multipart documentary The Last Dance, which covers Michael Jordan’s final season with the Chicago Bulls.

On another front, Netflix has quietly built itself into an excellent source for streaming anime. It does a particularly good job with older series, such as Inu Yasha, Robotech, and Rurouni Kenshin. Little Witch Academia. Netflix has brought its considerable production clout to anime as well, including rebooting the venerable Voltron and She-Ra series and developing originals such as Castlevania.

The trouble with Netflix’s anime collection is the same as with the rest of its content: It comes and goes unpredictably. Crunchyroll offers a much larger and industry-leading content library of anime titles. Hulu is another option for anime fans, with a collection of over 400 classic and critically acclaimed anime shows and movies such as Cowboy Bebop and Ghost in the Shell.

Simple And Easy To Use

We are going to start with the most obvious thing. Netflix is so simple to use. You do not have to set up anything. If you are using Netflix on your computer, simply go to netflix.com and log in. On the other hand, if you want to watch movies and TV shows on your phone or tablet, download the Netflix app for Android or Netflix app for iOS. Then, open the app, log in and you are ready to go. You can browse by genre, or by name. It is all very easy.

There is nothing more annoying than a bunch of commercials that interrupt the movie or a TV show you are watching.  Netflix is commercial-free. This means that when you find a film or a show you want to watch and click Play, you will watch it without being interrupted by ads. Don’t worry, this goes for a free trial as well.

If you love to watch TV shows and movies, you will love what Netflix has to offer. You will find popular video content in the library and more. Netflix has distributed a wide range of original TV shows, including “Orange Is The New Black” and “House Of Cards”, movies and documentaries. When you sign up for a free trial period, make sure to watch some of Netflix’s original programs. You will find true gems there, and maybe some of the movies or tv shows will become your favorites.

Netflix now allows users to download the content and watch it offline. This is such a great option, especially if you are planning to go on a road trip with friends or a vacation. Perhaps you won’t have a great internet connection, so you won’t be able to stream the shows and movies. Netflix made sure that you get to enjoy yourself no matter where you are.

Once you try Netflix, you will come to the conclusion it really offers a fantastic experience. If you choose the standard basic membership plan, you can watch movies and TV shows in HD or Ultra HD. You can FF and you won’t have to wait for the specific part to load. All this with a decent internet connection. Moreover, you can create a list of your favorite movies and shows. You also get to explore new content.

Netflix is the clear winner when it comes to the selection it has to offer. With over 100,000 options, Netflix outshines Hulu. It sports the most popular TV shows as well as a wide range of internationally acclaimed films. It also has a collection of original Netflix shows and movies. There are various legendary Netflix series such as “Breaking bad”, “Prison Break”, “Narcos” etc.

About the prime video :

What Can You Watch on Prime Video?

Although Amazon Video started out as a place to purchase and watch TV shows and movies, the industry has changed and Amazon has embraced the world of unlimited, buffet-style streaming for a single monthly fee. Take, for example, Amazon’s growing library of excellent original content such as Bosch, Catastrophe, Electric Dreams, Flack, Fleabag, Good Omens, Hanna, Homecoming, Hunters, Invincible, Jack Ryan, Tales From The Loop, The Marvelous Mrs. Maisel, Patriot, The Boys, Undone, Upload, and UtopiaUtopia. Amazon even saved The Expanse from cancellation.

Amazon is also producing a series based on the Fallout franchise, one set in the world of Lord of the Rings, and one based on the mammoth Wheel of Time fantasy series. The list of originals continues to grow, and while it’s not as large as Netflix’s or HBO Max’s collection, many of the shows are on par, quality-wise. Prime Video’s original shows also outclass Hulu’s.

You get more than just Amazon’s originals with Amazon Prime Video, including shows such as Chuck, Burn Notice, Hannibal, Mr. Robot, and The Americans at no additional cost. Note that Prime Video has already lost shows such as Justified, The X-Files, and Veronica Mars to Hulu. Other HBO and NBC shows previously on the service have left or are leaving soon, too. Amazon Prime Video has the most shows any streaming service, but when you filter for quality, Netflix and Hulu are better options.

Prime Video’s library also includes a rotating library of popular movies, plus a surprising number or classic films. Like Netflix, it also creates original movies, such as Blow the Man Down, Honey Boy, Manchester by the Sea, My Spy, Troop Zero, The Big Sick, The Vast of Night, and The Report. Many of these movies have not fared as well as Netflix’s The Irishman, El Camino, or Roma, but Sound of Metal did win an Academy Award. Prime Video has more movies than any other service, but when you filter for quality, its numbers are in line with Netflix’s. Of course, if you love B movies (and even C and D movies) you may disagree! Amazon is buying MGM for $8.45 billion, however, which should boost its movie library significantly.

With your Prime membership, you have access to exclusive Amazon Originals, blockbuster Bollywood movies, regional movies, and more.

ONE MEMBERSHIP, MANY BENEFITS :

IF RULES ARE NOT FOLLOWED, YOU CAN LOSE ACCESS TO YOUR SUBSCRIPTION